How I do an Abdominal Nissen Fundoplication.

(My thanks to Brendan Ellis, Medical Illustrator, Royal Victoria Hospital, for the excellent drawings) 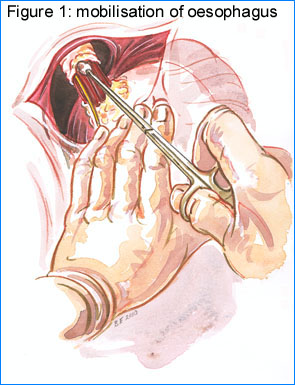 Incision: Upper Midline laparotomy - does not need to be too extensive - below xiphisternum and above umbilicus.

Retraction: It is important to obtain a good lift on the costal margins. I use a Bookwalter retractor (though an Omnitract or Golligher will suffice) with one blade under each costal margin lifting out as much as up. A further blade is later placed over the liver andsometimes one holding the left edge of the laparotomy.

Mobilisation: Mobilisation of the oesophagus is the dissection of the crurae. A minimum of dissection is desirable. I avoid dividing the vagal branches and accessory vessels in the upper part of the lesser (gastro-hepatic) omentum and the short gastric vessels as this helps the fundoplication wrap from slipping and causing an hourglass deformity of the stomach. With traction on the body of the stomach the thin upper part of the lesser omentum is divided to expose the right crus. The dissection is continued across the front of the oesophagus to the left crus which is exposed by dividing the peritoneum over it. Blood loss can be reduced by using Powerstar bipolar scissors. I do very little dissection on the anterior wall of the cardia as this area is very vascular and dissection is unnecessary. 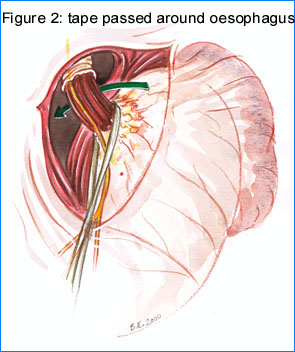 Having exposed the front of the oesophagus a pledget is used to tease adventitial tissue from around the oesophagus under direct vision (Figure 1). The dissection is continued behind the oesophagus till a window is created through which the fundus will be passed. I attempt to keep the vagal nerves with the oesophagus.

I generally do not need to perform any special manoeuvres to reduce the hernia or lengthen the oesophagus. Any hernia which is not easily reducible on barium swallow or OGD I will have approached via thoracotomy. The only exception to this is a true para-oesophageal, tumour with the OGJ below the hiatus, which I am prepared to approach from the abdomen. If reduction is difficult I divide the crurae anteriorly to increase the size of the hiatus. To do this bluntly dissect between the crurae and the pericardium, transfix the vein either side leaving the tails of the sutures long to use as retractors and cut the muscle anteriorly tending towards the left. This will allow any hernia to reduce.

I have not found it necessary to perform an oesophageal lengthening procedure in the PPI era. 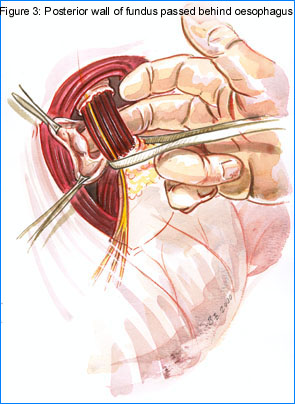 Once the oesophagus has been exposed a rubber catheter (or vascular sloop or nylon tape) is passed round the oesophagus to allow traction (Figure 2).

Fundoplication: The fundus is then passed behind the oesophagus (Figure 3) and picked up with a long Babcock forceps. Generally this is the posterior wall of the fundus and no short gastrics need divided. A 50 Fr Maloney bougie is then passed by the anaesthetist and guided by the surgeon into the stomach (make sure to relax on the oesophageal tape to allow the bougie into the stomach). The anterior fundic wall is then grasped and brought round anteriorly to meet the posterior tongue of fundus. The position is adjusted so that the wrap is not unduly tight. Ensure that the fundus is used and not the body of the stomach or an hourglass deformity will result.

The fundoplication is sutured in place using 2 strips of Teflon, 2cm x 0.5cm as buttresses on the outside of the wrap. 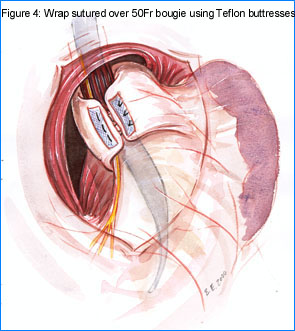 (De Meester describes using additional Teflon between the stomach and the oesophagus within the wrap.) I use a 0 Ethibond on a double ended 40mm needle (PLL 6375 Ethicon Ltd, Edinburgh) to pass three horizontal mattress sutures. The sutures pass through the Teflon, anterior fundus, anterior oesophageal wall, posterior fundus and Teflon (Figure 4). I try to pick up serosal wall of the cardia with the distal suture. Thus the wrap straddles the OGJ. It is easier tomplace the sutures with the bougie withdrawn into the oesophagus. The sutures are tied, however, with the bougie in place to prevent postoperative dysphagia.

Crural repair: The crura are apposed posteriorly with the 50 Fr Maloney bougie in place (Figure 5). 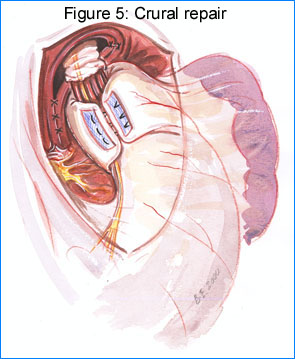 It is frequently more convenient to place the crural sutures prior to performing the fundoplication and without the bougie in place. They can be tied at this stage or at the end of the procedure. If this is the case I tend to place some extra sutures which can be removed without tying if the repair is snug enough. For a large hiatus, particularly with a para-oesophageal hernia, additional sutures can be placed anterior to the oesophagus. (Placing a single suture at the apex of the hiatus will retract the hiatus, tenting it up to assist passing the anterior crural sutures.) Though I have in the past used 0 Silk as in the diagram I have more recently changed to using a the double ended 0 Ethibond to place a horizontal mattress suture over Teflon buttresses in an attempt to prevent para-oesophageal herniation. It is important to close all defects in the crural limbs posteriorly as I have seen para-oesophageal recurrences between crural sutures even though the commonest place seems to be between crural repair and oesophagus. 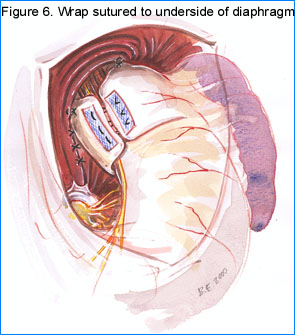 Postoperative care: No nasogastric tube is placed (unless complications are expected). Attention is paid to good analgesia (epidural if possible) and respiratory physiotherapy (upper midline laparotomy causes as many respiratory problems as thoracotomy). Mobilisation commences the day following surgery. Liquids can be commenced the following day though patients frequently do not feel like any oral intake. A semisolid diet is allowed after the second PO day. Patients are warned that postoperative dysphagia, bloating and flatulence are to be expected in the first few weeks and that they will probably only tolerate a soft diet for those weeks. They are advised not to undertake heavy physical labour fo 3-6 months after surgery till the findoplication is well fibrosed in place.