How I do a trans-thoracic fundoplication

(My thanks to Brendan Ellis, Medical Illustrator, Royal Victoria Hospital, for the excellent drawings) 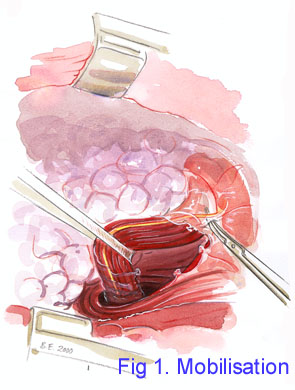 Mobilisation: Start by dividing the inferior pulmonary ligament. This exposes the oesophagus and the hernial sac (if there is not a sizeable hernia sac the abdominal approach should usually be used). Medially dissect the bloodless plain between the oesophagus and the pericardium. This will bring you to the pleura on the right side and will expose the crura anteriorly. At the diaphragmatic extent the pericardial fat will be divided . Superiorly the dissection should be continued osterior to the inferior pulmonary vein and well up to normal oesophagus.

Posterior dissection: Lift the sac medially and dissect from the aortic adventitia (Ethicon Powerstar scissors reduce bleeding here). It is important to continue the dissection well down to the diaphragm to expose the crurae posteriorly. Superiorly continue the dissection to normal oesophagus. Later it will be necessary to mobilise almost as far as the aortic arch to allow reduction of the hernia. As the dissection proceeds into the mediastinum the right pleura will be reached and it will be possible to tape the oesophagus outside the vagi.

Lifting the oesophagus forward and teasing the tissues from the back of the sac will reveal the right crus. Continue to tease it off the sac revealing peritoneum only between you and the caudate lobe of the liver. Break through the peritoneum with blunt dissection.

Anteriorly, enter the sac. Divide it anteriorly in line with the left crus and continue this dissection forward and around till you reach the hole previously made in the peritoneum posteriorly. It is usually necessary to divide the hepatic branches of the vagi and accompanying vessels, and the pericardial fat to complete this mobilisation.

Posteriorly, divide the sac carefully avoiding the short gastric vessels. It may later be necessary to divide a number of these after ligation in continuity, in order to free enough fundus for a tension-free wrap. As one reaches the short gastrics it will be necessary to divide the peritoneal reflection between the sac and the stomach to allow encirclement of the oesophagus at the OGJ. The sac now forms a fan anterior to the oesophagus. Redundant sac can now be excised (Fig 1).

I generally do not need to perform any special manoeuvres to reduce the hernia or lengthen the oesophagus. I have not found it necessary to perform an oesophageal lengthening procedure in the PPI era. 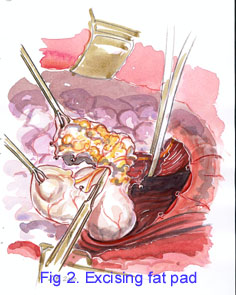 Excising the fat pad: The gastro-oesophageal fat pad now needs to be excised to allow the wrap to lie against the oesophagus(Fig. 2).Leaving the fat pad allows a conduit for para-oesophageal recurrence. It can be difficut to protect the vagal nerves at this stage. Thickenings in the residual sac can mimic these nerves. 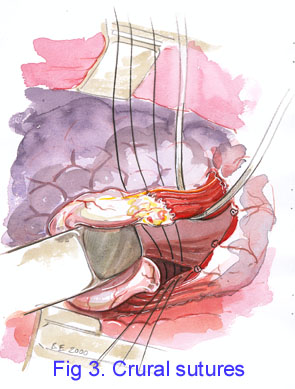 Placement of Crural Sutures: As it is difficult to place the crural sutures after the fundoplication has been performed it is best to place the sutures at this stage and tie them later. I frequently place more sutures medially than necessary at this stage and remove them later without tying if they look too tight. Usually Iplace three interupted silk sutures (Fig. 3) though more recently I have used two horizontal mattress Ethibond sutures over a Teflon buttress.

Fundoplication: Unlike the posterior abdominal fundoplication I perform an anterior fundoplication through the chest. Some short gastrics may need to be divided at this stage. A 50 Fr Maloney bougie is then passed by the anaesthetist and guided by the surgeon into the stomach (make sure to relax on the oesophageal tape to allow the bougie into the stomach). The fundus is brought round the OGJ as for an abdominal Nissen but also inkwells as for a Belsey. The position is adjusted so that the wrap is not unduly tight. Ensure that the fundus is used and not the body of the stomach or an hourglass deformity will result. 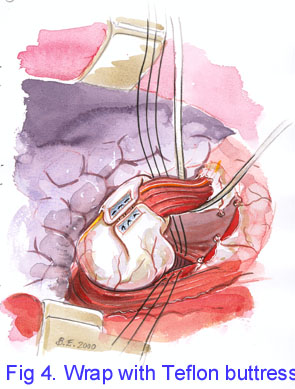 The fundoplication is sutured in place using 2 strips of Teflon, 2cm x 0.5cm as buttresses on the outside of the wrap. (De Meester describes using additional Teflon between the stomach and the oesophagus within the wrap.) I use a 0 Ethibond on a double ended 40mm needle (PLL 6375 Ethicon Ltd, Edinburgh) to pass three horizontal mattress sutures. The sutures pass through the Teflon, fundus, anterior oesophageal wall, fundus and Teflon (Figure 4). I try to pick up serosal wall of the cardia with the distal suture. Thus the wrap straddles the OGJ. It is easier to place the sutures with the bougie withdrawn into the oesophagus. The sutures are tied, however, with the bougie in place to prevent postoperative dysphagia.

Securing the wrap below the diaphragm: 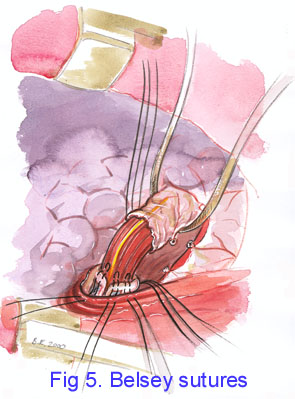 Withdraw the bougie to the mid-oesophagus. Three "Belsey-type" sutures are used to inkwell the wrap below the diaphragm, just like the second layer of the Belsey Mark IV procedure. I frequently use a Teflon buttress on the diaphragmatic and oesophageal ends of these sutures though it may not be completely necessary. Try to get the first (against the pericardium anteriorly) well around onto the right crus, at "2 o'clock". The second lies laterally at "9 o'clock". The third (at "7 o'clock") may overlap some of the as yet untied crural sutures. As these sutures are gradually tightened in turn the repair is reduced.

Closing the crurae: Replace the bougie and tighten the crural sutures from posterior to anterior. The last sutures may be redundant if the hiatus is snug against the bougie. For a large hiatus, particularly with a para-oesophageal hernia, additional sutures can be placed anterior to the oesophagus. It is important to close all defects in the crural limbs posteriorly as I have seen para-oesophageal recurrences between crural sutures even though the commonest place seems to be between crural repair and oesophagus. Withdraw the bougie. After ensuring haemostasis, place a good underwater seal drain basally with the tip lying behind the oesophagus in the mediastinum. 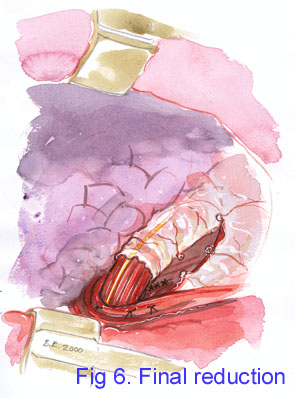 Postoperative care: No nasogastric tube is placed (unless complications are expected). Attention is paid to good analgesia (epidural if possible, injecting the phrenic nerve with Marcaine or Chirocaine reduces the shoulder tip pain) and respiratory physiotherapy . Mobilisation commences the day following surgery. Liquids can be commenced the following day though patients frequently do not feel like any oral intake. A semisolid diet is allowed after the second PO day. Patients are warned that postoperative dysphagia, bloating and flatulence are to be expected in the first few weeks and that they will probably only tolerate a soft diet for those weeks. They are advised not to undertake heavy physical labour for 3-6 months after surgery till the findoplication is well fibrosed in place.

Return to How I do it menu.